The first study demonstrating a relationship between “coronavirus” outbreaks and the presence of 5G networks has emerged from Spain and is by Bartomeu Payeras i Cifre. Bartomeu is a biologist specializing in microbiology and is working at the University of Barcelona. His original source study can be sourced HERE, and is has been translated into English by Claire Edwards (on SOTN). And published also HERE on GumshoeNews.

And thanks to the translator Claire Edwards.

The study, I believe, is hugely significant in that it demonstrates clearly the most likely probability that the COVID-19 hypoxic injuries and hospital admissions directly correlate to electromagnetic radiation exposure by 5G Networks.  The biologist makes no claim as to any causation etc. One can discuss that maybe the 5G rollout areas are also densely populated and polluted, and that this may be more significant.  But governments across the world can argue ‘till the cows come home that 5G is safe and that there is no correlation to the coronavirus outbreaks — but the revelation of this data seems irrefutable at this stage, and there should be open and honest debate.

Some of the more startling discoveries are (in summary):

The nine countries with the most infections worldwide all receive 5G radiation from satellites. Comparing four nearby countries of the same latitude: Portugal, Spain, Italy, Greece. The two countries with 5G (Spain and Italy) have 220% more infections than Portugal and Greece.

The comparison between the small State of San Marino (Italy) and Croatia (just across the Adriatic Sea) is astonishing. San Marino was the first European state to get 5G technology, and has the highest rate of infection. San Marino is 2.59 times more than Italy and 27 times more than Croatia — a country that does not have 5G.

The five ‘hot’ cities in Italy align with the 5G rollouts, as does Spain. Even the hot spots in Barcelona and Madrid align with 5G coverage. Another very interesting comparison is between Mexico and the US. Rates in the 5G-US are 2.7 per 1000 inhabitants, whereas Mexico (no 5G) is 0.04/1000.

Another astonishing observation is Africa — a continent almost devoid of onfections, except for South Africa. Well Bartomeu claims that only South Africa has 5G. (I will look into this in more detail.) As a further observation from me, most of the Australian cases were from those off the 5G-cruise ships and coming off international flights. Were they flying close to 5G satellites?

Bartomeu’s observations about 5G-China and surrounding countries is yet another red flag. The countries surrounding China had approximately 10X fewer cases. Myanma has a 0.0007/1000 inhabitants infection rate.

It is clear from this biologist’s research that 5G plays a part in this “pandemic”. One has to assume the government researchers know of the impacts on the human body. It would be easy and inexpensive to conduct experiments to test the health impact on humans and other life forms. They must have decided the risk of 5G frequencies worth taking.

The only discussion remaining is: do the benefits of 5G outweigh the deaths and health effects of EMF radiation on humans and all life on the planet?

With that said, I now post Ms Edwards’ translation of a slightly abridged version of Bartomeu’s study:

by Bartomeu Payeras i Cifre

The COVID-19 pandemic and its effects in early 2020 have surprised scientists and politicians. If any study aimed at understanding the phenomenon and which consequently may help to clarify the causes of the pandemic is carried out, it should be promoted and/or taken into consideration. The correlation between cases of coronavirus and the presence of 5G networks has been addressed in alternative media and social networks. It is noteworthy that, at least in Spain, the media have not covered the scientific studies on the subject of 5G, nor asked the government any questions about this in the daily press conferences that it conducts to report on the state of the situation. The team of scientists advising the Spanish government has also failed to raise this issue.

It is common sense that the ability to demonstrate this correlation would be very important data to contribute to the understanding of, and the solution to, the problem.

To assess whether a correlation exists between cases of coronavirus and the presence of 5G networks. Without entering for the moment into subsequent cause-effect approaches in the case of positive results. Given that there is a sufficiently large statistical sample, it is possible for the results obtained to have a high level of reliability.

The study has benefited from the official statistical material published daily, which is a basic and valuable tool. It should be noted that in these publications, the methodology used for counting cases of coronavirus infections does not generally provide real data. In Spain and many other countries, it has not been calculated as there are not enough tests for such analyses. However, this does not alter the results of this study since it is based on the comparative rather than the absolute method of infection. Therefore, in order to avoid statistical error, we will compare the density value of confirmed cases of coronavirus (expressed in number of cases per 1000 inhabitants) instead of absolute values. Since the criterion for counting used by the health authorities within the same state or city is the same, the comparison of published values for different cities or regions will be equally reliable for statistics. Comparisons between different countries of confirmed cases, excluding asymptomatic cases, will be equally reliable. The possible exception of some non-transparent country that could manipulate the publication of its data is beyond the control of this study.

The data for each chart were taken on the same day. Graphic results and data published below:

“Considering very small countries included the worst outbreak in the world is currently recorded in San Marino with 101 cases in a country of 33,400.”

The figures for Turin, Milan, Rome, Bologna and Naples should be compared with those cities without 5G. It appears that hotspot cities coincide with 5G roaming supplied by Vodaphone.

Data for cities with 5G should be related to the number of infections in those cities. Since data by city are not available, the comparison has been made with data for autonomous regions. This causes the data of the capitals to be diluted with those of their region.

This is why the comparison in autonomous regions with one or two provinces is more significant: Extremadura, Murcia, Madrid, Navarra, Rioja, Balearic Islands, Asturias or the Canary Islands. Also in Euskadi since the three capital cities have 5G.

11.  “Border Effect” Between Mexico and the US 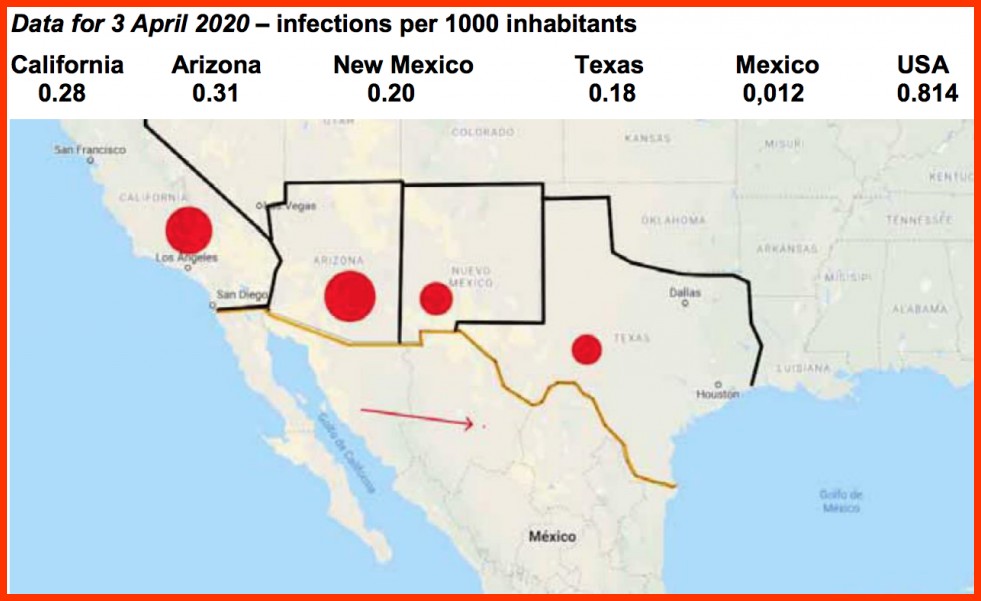 12. Canada, US and Mexico: Chart of 5G Networks and Rates of Infection 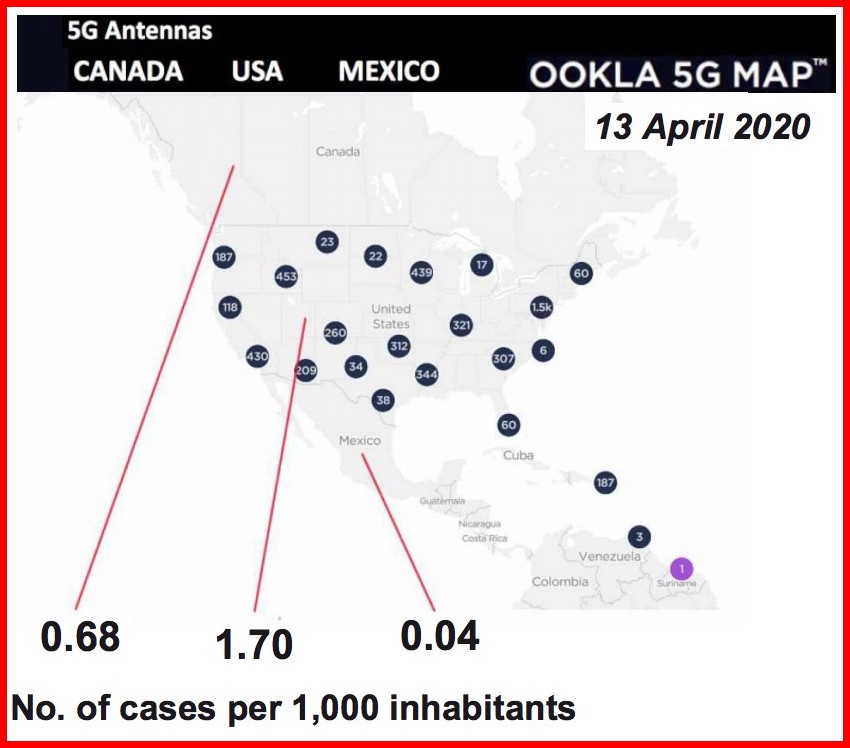 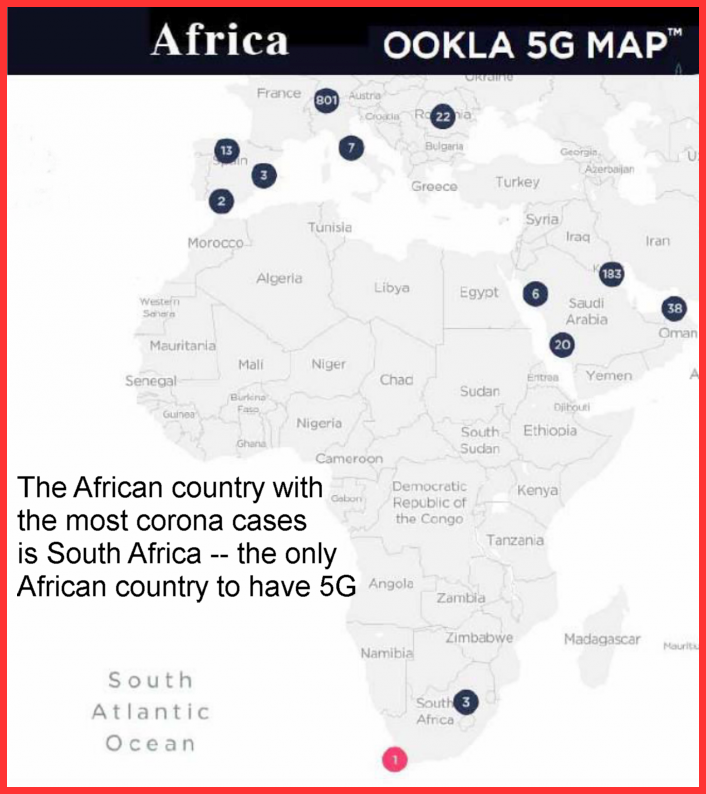 14. Persian Gulf: 5G Network and US Military Base 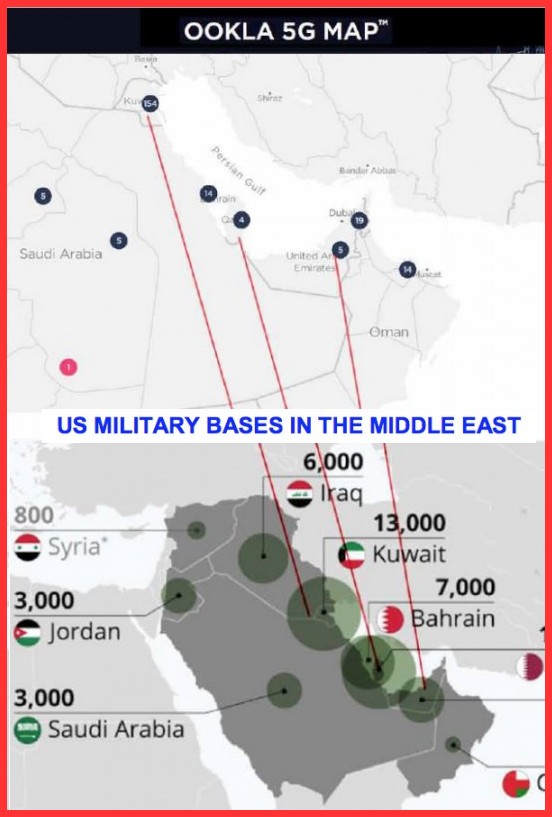 15. China and Neighbouring Countries: Chart and Rates of Infection 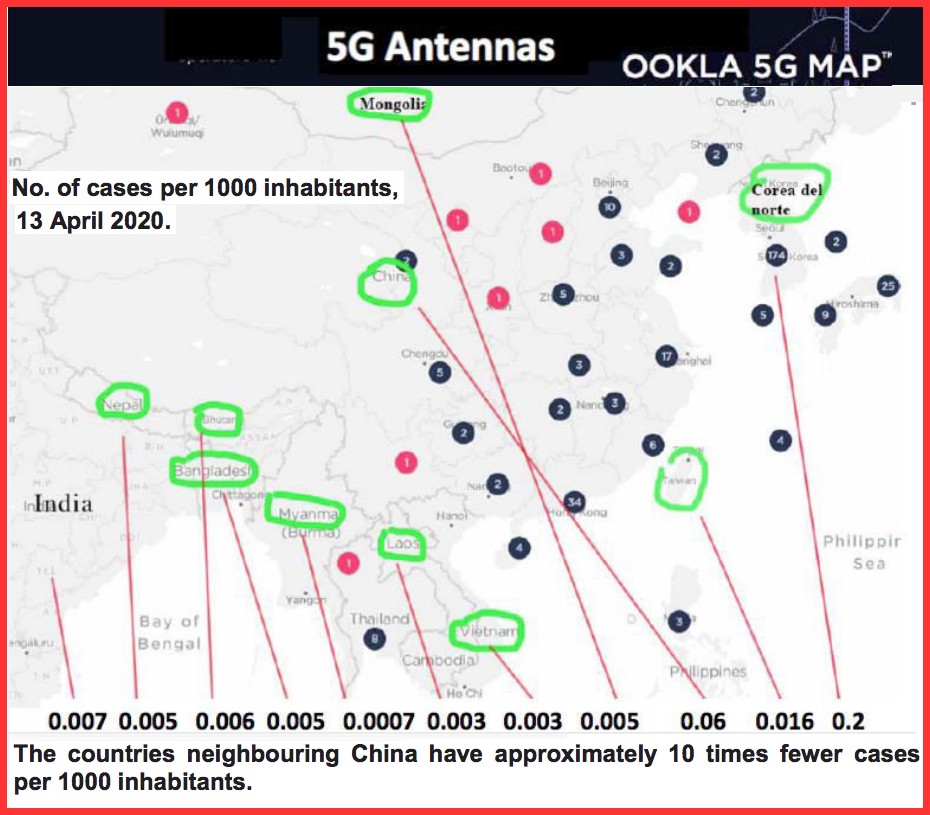 To know whether or not the result obtained is that of a random phenomenon, a statistical analysis of the results of an experiment must be carried to calculate the probability of the event occurring. The probability calculation is obtained by dividing the number of favourable cases by the number of possible cases. If the result shows that it is not a random phenomenon, it shows sufficient causal reason to analyse the causes.

To eliminate any upward errors we will always opt for the most conservative numerical option.

Let us therefore calculate the probability of three of the examples analysed above.

(a) Probability that the 9 most contagious countries on the planet are countries with 5G networks.

[I HAVE EXCLUDED JAPAN CALCULATION]

(b)  Probability that the 5 most contagious countries in Europe have 5G networks.
There are 49 countries in Europe, among which it is currently difficult to know if they currently deploy 5G, as there are 5 that have declared a moratorium, and many others do not have operational networks although companies publish as if they were already operational when they have signed agreements. We will calculate it downwards, as a conservative option, we will assume that about 15 countries have operational 5G systems.
Pr = 15/49 x 14/48 x 13/47 x 12/46 x 11/45 = 0.00157.

(c) The case of San Marino is highly significant. It is located within the Italian territory, with a similar culture, economy, and social level, but presents much higher rates of infection. The only difference is the time of exposure of its citizens to 5G radiation, because it was the first state in the world to implement such technology on 4 September 2018, while in Italy it was 5 June 2019. This opens the door to debate about the likely influence of 5G on the increase in the rates of infection.
Pr = 1/194 x 1/194.

These figures are eloquent enough to make calculating the other cases unnecessary.

The results for the city of Barcelona (pp. 7-8) indicate that sociological factors do not have a significant influence on the rates of infection, but if we see a clear relationship with the 5G coverage map, which added to the 4G coverage, gives us a correlation between mobile coverage and the proportion of cases of coronavirus. If more data were available, this study should be extended to other cities.

Bartomeu Payeras i Cifre is a biologist specialising in microbiology working at the University of Barcelona who has published several research papers. He worked on and researched smallpox bacteria and viruses at the Hubber pharmaceutical laboratories in Barcelona. He created and worked in the Department of Marine Microbiology at the Oceanographic Laboratory of Palma de Mallorca. Clinical analysis at Centre d’Analisis Clinicos in Palma. Genetic engineering: episodic exchange between Paracolobacter and Citrobacter C-3 with bacteriophage. Biogram, method for assessing vitamin B12 activity. Study of marine bacterial contamination in the Port of Maon. Professor of Mathematics, Physics and Chemistry and Biology at IEM. Discoverer of the Dali code with which he encrypted his gifts in his paintings.